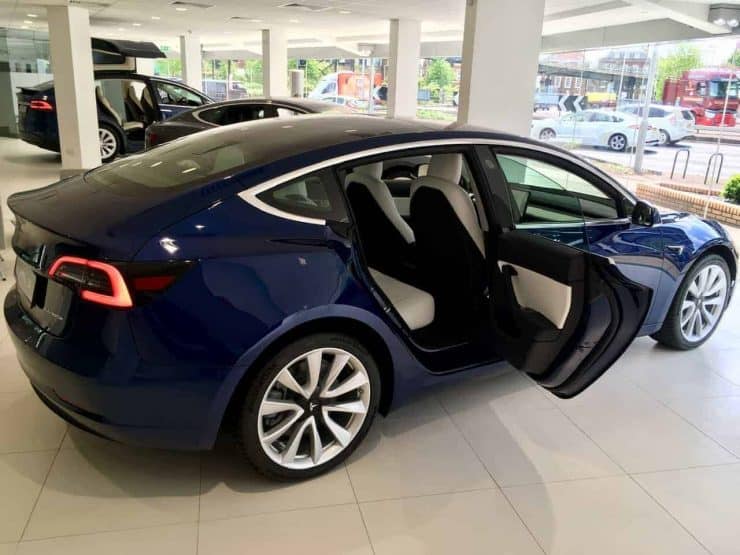 Tesla’s deliveries are normally very lumpy with shipments arriving typically at the end of a quarter and limited supplies between boatloads. This year is typical of this with 6,133 Tesla’s sold in Q1 2020 of which…5,235 or 85% were delivered in March!

Although the Fremont factory is currently closed because of the virus cars are still in transit so Tesla took a 2.06%* share of the UK market in march up from 0.16%* a year ago. All Teslas are pure electric BEVs so 44% of UK electric car sales were Teslas in this month. The Tesla Model 3 took the number 9 sales slot in the UK with 4,718 sold. For Q1 2020 Tesla is at 1.27% up from 0.12%, still a creditable 10x increase thanks to the Model 3.

*Tesla figures are listed in SMMT data as “other” in the top 10 models and “other imports” in manufacturer data. It is possible some other non Tesla vehicles are included in the numbers but if so indications are these numbers are very small.

If Tesla can divert enough Model 3 production to the UK do they have an opportunity to take a sales chart position in the top 10 for 2020. There are some factors in favour.

So is a top 10 sales position achievable?

It’s quite a stretch. Tesla Model 3 deliveries are famously lumpy – 1,000s of cars delivered one month and almost none the next. The entry point to the UK top 10 was around 83,000 cars in 2019. That equates to a 3.59% market share over the whole year or around 7,000 cars a month. For a brand with 14,600 deliveries in the UK in 2019 thats quite a stretch. Is Elon Musk up to the challenge? Top 10 will probably have to wait till the RHD Model Y arrives but never say never.

Brands with falling sales for the full year 2019 highlighted in bold.

Diesel sales are dominated by fleet sales and luxury brands

Hybrid, Plugin hybrid (PHEV) sales included in our monthly snapshot along with Electric vehicles that form a small but growing share of AFV sales so we cover them separately below.

The UK alternatively fuelled vehicle stats now include MHEV or “mild hybrid” models. Only electrified in a marketing sense these so called hybrids are standard petrol & diesel MHEVs can’t travel an inch on electric drive & offer a tiny CO2 / Economy benefit of around 4%. MHEV sales will grow for a while as they will become the final iteration of pure fossil fuel combustion engine technology. We will not include them in our AFV figures